skip to main | skip to sidebar

"2K Games has revealed for the second time his shooter on the Xcom. It will be released in the month of August with the title The Bureau: Xcom Declassified.

The development of this game was greatly troubled. Announced for the first time in April 2010 as a first-person shooter and shown, as dazzling enough, a few E3, the title is returned later in the design phase. Now 2K Games announces the re-as third-person shooter. 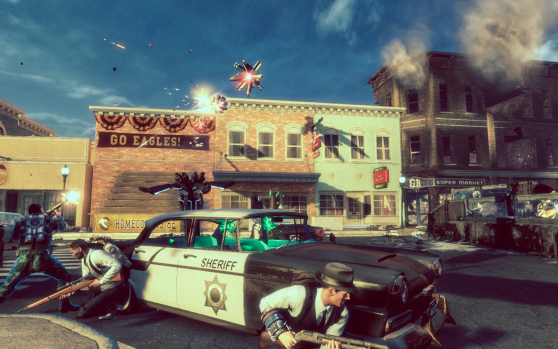 Entrusted to the team of BioShock 2, 2K Marin, the game now takes the name of The Bureau: Xcom Declassified and is provided in formats PC, PlayStation 3 and Xbox 360 for the next August 20 in North America and August 23 in Europe. At full price.
The Bureau is a third-person tactical shooter based on teams. The team wants to establish a strong dichotomy over the other recently released Xcom title, or the lucky Enemy Unknown , offering players the opportunity to experience the universe Xcom in real time, as opposed to turn-based structure of the previous game.
According to 2K Marin the franchise revolves around six concepts that all begin with T: team, technology, tools (tools in English), tactics, terror and tension. In the new Xcom not fail, however, the typical elements of the series as a base management and research on artifacts of alien origin.
The players, then, will be able to issue orders in real time to the comrades of the assault team managed through a system called Battle AI Focus. You may order to circumvent the enemy, to cover fire, to take advantage of a height or to deploy the special ability of the soldier, acquired with the progress of the experience. The development team wants to focus on storytelling and the depth of the story, and that's why The Bureau will not have a multiplayer component.
The Bureau follows the story of the agent William Carter. The stories are contextualized in 1962, during the Cold War. The United States is worried about a possible attack on the USSR or of an escalation of tension that may result in the use of nuclear weapons. For this reason, the U.S. decided to create a bureau that gives name to the game, which has the goal of preventing a hypothetical Russian invasion. But the Bureau will also deal with other facts, which relate more closely now.
It is, therefore, of a sort of prequel for Xcom, since it is assumed that the Bureau will become in the future just the secret organization Xcom. At a time when the aliens start invasion on Earth, however, the Bureau must change focus, the Russians own the aliens, who have now become the main threat.
The agency thus relies on Carter the task of leading the assault team into battle against the aliens. Like previous games in the series, The Bureau Xcom Declassified annovererà deaths permanent when one of the members of the assault team will die on the battlefield, in fact, it will be a final death, and the player will lose all the progress made ​​on that soldier up to that point, since it can no longer use it on a mission. 2K Marin is enthusiastic to have this added feature, which claims to be rarely present in the third-person shooter today. The developer, in short, will have a shooter sufficiently punitive, that is able to meet the favor of both the new players of the old fans of Xcom.
The goal is to have a learning curve soft at the beginning, with a system that helps the players to learn the mechanics of progressively. But at the same time, the developer says, there must be a difficulty "extreme" in other parts of the game.